A win for Southport Yacht Club crew at the 30th Anniversary of Phuket’s Kings Cup.

A win for Southport Yacht Club crew at the 30th Anniversary of Phuket’s Kings Cup.

In a division of twelve (12) entries, Craig Alcock and his team from Australia took on some of the World’s best Multihull Racing competition including entries from Russia, Great Brittan and New Zealand just to name a few. 12 division comprising of 93 entrants made up the 30th Anniversary Kings Cup Regatta, held in Phuket (Thailand) from December 3 – 10, 2016.

Phanton V, a Stealth 13 was launched from Asia Catamaran’s one week prior to the event. Owner and Skipper, Andrew Hurford who resides just south of the Queensland border, in Ballina took possession of his new vessel and gathered his family for the occasion. The crew also included Craig Alcock, Craig’s daughter Shelly and Tim Trezise, a long term friend from their School days at The Southport School, on the Gold Coast. Due to a dis-masting and damage of a fellowing Stealth Catamaran, Joel Berg from All Yacht Spars and formally Victoria joined Phantom V for the remainder of the regatta.

“It took a couple of races to get to know and understand the boat, however it did not take long. After the second days racing, we had a good appreciation of the vessel. Coming into the last race, we were in second (2nd) trailing Thor by three (3) points so we were somewhat pleased with getting on the podium in our first regatta. The last day, just went our way, and we secured another first (1st) place and took out the regatta on a count back” said Craig.

Craig is not only a keen sailor at Southport Yacht Club, but also an extremely valuable part of the Club’s Volunteer team. Craig and Andrew raced Hobie 16’s together back in the 1980’s representing Australia in the 1985 Fiji World Championships.

Craig is looking forward to returning to Phuket in 2017 to defend their winning title. 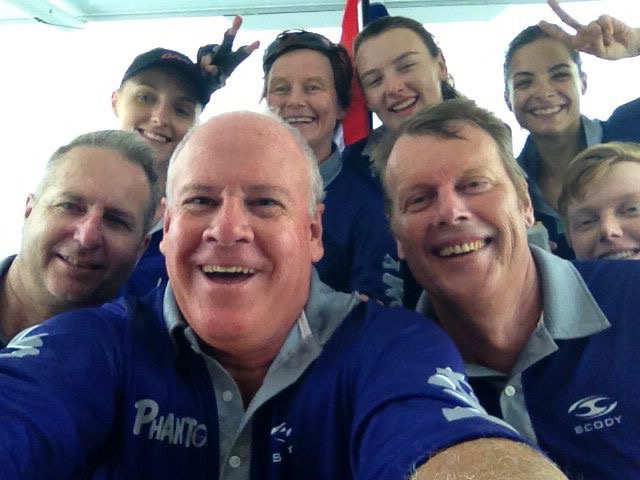